You are here: Home / BBQ Recipes / Prime Rib vs. Ribeye – What is the Difference?
Quick Navigation
Anatomy of the Prime Rib and Ribeye: Where Does Each Cut Come From?
Ribeye
Prime Rib
The Size of the Cut
Quality of the Meat
Flavor
Cooking Technique
Preparing Ribeye Steaks
Best Way to Cook Prime Rib

The first thing that many people notice when comparing prime rib and ribeye steak is the cost—prime rib tends to be a more expensive cut of meat. Why is that, though, when both cuts of meat appear to be the same?

While prime rib and ribeye are sourced from a similar area of the cow, there are several differences between these cuts of meat. The differences include the part of the cow that the meat comes from, how the bone is cut, the flavor and fat distribution through the meat, and the preparation of meat that is best for creating a juicy, succulent steak.

Anatomy of the Prime Rib and Ribeye: Where Does Each Cut Come From?

Many people are confused between the difference in prices because both prime rib and ribeye come from the rib of the cow. The bone that is left on the cut of meat is the rib and the rib meat is what you are buying.

The rib eye can be any cut of steak that comes from the rib of the cow. The name rib ‘eye’ comes from its round appearance after the ribeye has been cut away from the curved bone of the steak. Sometimes, the bone is left on, but it is trimmed for a more elegant and distinguished appearance.

True prime ribs come from what is known as the ‘prime’ area of the ribs. Usually, this is located between ribs 7 and 11 on the cow. This area of the rib is known for having the thickest cap, which is a rich, flavorful piece of meat with heavy marbling. Many culinary professionals will agree that the rib cap is one of the most sought-after pieces of the cow. The heavy marbling in this area reflects what is said to be a quality steak. Once the fat renders down during the cooking process, you are left behind a tender, juicy bite of steak.

The Size of the Cut

Often, prime rib is known for being a much larger size than the average ribeye steak. The reason it is usually tenderer and juicier is that the thicker cut lets it be cooked longer without becoming dry. It is also common for the prime rib to be sold in roast form, which is usually a large cut of meat that has 4-5 rib bones and meat. It is typically cooked whole, then the slices are cut away and served.

Quality of the Meat

Generally speaking, prime rib is a higher quality cut of meat than the ribeye. This is the reason it costs more and is often served in high-end restaurants, where it is usually sliced off a prime rib roast that has been cooked to perfection.

One thing you should note, however, is that not all prime rib is considered ‘Prime’ on the USDA grading chart for meats. There can be different grades for prime rib, based on the cow that it came from, how the cow was raised, and the quality of the cut of meat. If you are concerned about finding the best prime rib possible, you will want to choose a ‘Prime’ cut of meat. Other grades include Select and Choice, with Select being the lowest grade awarded to quality cuts of meat and Choice being the middle ground. You can learn more about the ratings and what each of them means here.

People who tell you that every steak tastes the same have never experienced the major difference between high-quality and low-quality. Prime rib is often said to have a ‘buttery’ flavor, so it is not uncommon for it to be paired with garlic and herbs while slow-roasted, to create an amazing, melt-in your mouth taste.

While ribeye is still a tasty cut of steak, it does not have an especially strong flavor. This makes it very adaptable, as you can pair it with different spice rubs or even just add salt and toss it on the grill to create a delicious meal.

The flavor, tenderness, and juiciness of a cut of steak is heavily affected by how it is cooked. Some beef cuts respond well to dry heat like grilling, while others require moist heat from roasting to prevent them from becoming dry and tough. Below, you will find some of the best ways to prepare ribeye and prime rib.

Ribeye steaks are a thinner cut of meat than prime rib, so they will not require nearly as much cooking time. They also respond much better to dry heat, because they have a cooking time. This makes them perfect for the outdoor grill.

While the ribeye does not have the same marbling as the prime rib cut, it does still have good marbling and a great flavor. You can season with only salt if you would like. Another option is to do a dry rub. You can pan sear and cook this in the oven, but the ribeye is perfect for grilling.

Low and slow is always the best technique for cooking a prime rib roast. The buttery flavor of the prime rib works amazingly well with garlic and herbs, but you do not have to limit yourself to this flavor combination. There is one method that involves pan searing to get a brown outside and then slowly roasting in the oven, in a pan of the prime rib’s juices.

Another option is to slowly cook on the grill, inside a pan to collect the juices and keep the prime rib moist. As an added benefit, you can use the juices to create a sauce (or an au jus) to serve on top of the meat after it is sliced. If you are not serving a roast, dry heat from a grill will work for prime rib as well.

While all beef steaks come from a cow, there are several factors that separate each of them from another. Ribeye is a cheaper cut that grills well, even when prepared with just salt. Prime rib, on the other hand, is a much more expensive cut that is said to have a natural buttery flavor. Factors like your budget, who you are entertaining, and how you want to prepare the cut of meat may come into play here. Either can become a delicious cut of meat with the right preparation.

Hi! My name is Nathan and I’m a passionate meat-lover and certified grill connoisseur. I fell in love with grilling food back when I was a little kid when my grandfather used to cook tasty burgers in our backyard every Saturdays. 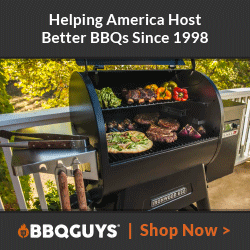 Grilling Affection is a participant in the Amazon Services LLC Associates Program, an affiliate advertising program.